Into the Sky
As you fly up through the clouds into the bright sunshine, you look out of the window and see a beautiful panorama unfold. You are heading for a far off land and can leave all your worries behind. Anyway, even if you wanted to look backwards, planes don't have windows facing that way, and you wouldn't see what else you're leaving in your tracks (besides all your worries), since hot exhaust gases are invisible. So to see what you're missing, fly the little plane on this web page by moving your mouse, and you will see those emissions!
(If you don't see it, dynamic HTML and javascript are not enabled on your browser) There are three gases emitted by aircraft which contribute to global warming: H2O, CO2 and NOx

The most obvious is the water vapour (created by burning jet fuels -see below) which forms condensation trails -clouds of frozen ice crystals. Since the air in the upper troposphere (the level at which most commerical planes fly) is naturally very dry, water vapour emitted by aircraft can make a big difference. Sometimes the contrails cover the whole sky as shown by this satellite photo taken over Germany, and the average coverage in this region is about 6%. Have you ever wondered, why the sky is so much clearer in remoter locations?

Although these contrails reflect a little sunlight away from earth, they reflect back to earth much more invisible infra-red (heat) radiation which would otherwise escape to space -and therefore they have an overall warming effect. This is hard to measure accurately, because the contrails eventually spread out and become indistinguishable from natural cirrus clouds.

Not all of the water vapour forms contrails, but water is itself a "greenhouse gas" which also traps this outgoing infra-red radiation. Each water molecule traps much more heat and also survives much longer at this height than it would do at sea-level.

Jet-fuel - kerosene - is a mixture of substances produced by distilling crude oil, which can be represented by C13H28 (this is assumed in the "how much" calculations"). The chemical equation for burning it is as follows:
2C13H28 + 40O2 =>26CO2 + 28H2O

So you can see, that for every 14 water molecules produced, the aircraft must also emit 13 of CO2. This is also a greenhouse gas and will stay in the atmosphere warming the earth for an average of 100 years, some of it for 1000s of years. There's no way that you can get the energy from such fossil fuel without producing that much CO2. It's not a by-product that can be "scrubbed" from the exhaust.

A Boeing-747 can burn over 200 tons of fuel in one flight. If you have already clicked your travel route on the world map, the "how much is this" section will calculate the volume of CO2 that will be emitted per passenger. The "global context" section compares this amount to the sustainable average level of emissions per person per year.
If you understand German, you can find a similar calculation on the web page Klimabelastung durch Flugverkehr
(For more about greenhouse warming click here)

A simple "rule of thumb" to remember, is that a plane uses about as much fuel, and therefore produces about as much CO2, as would every passenger driving one car the same distance. So next time you're thinking of flying thousands of miles, think how much petrol you would need to put in a car to go so far. Since take-off uses a disproportionate amount of fuel, short-haul flights emit a bit more per passenger-kilometer, and long-haul flights a bit less.
Note: the car comparison is for typical european cars, not for the less efficient american gas-guzzlers. Trains produce, on the other hand, about 1/3rd as much CO2 per passenger-kilometer (for more details on this see the "ecobalance of the Climate Train" and the bar-chart below), and could potentially be run from renewable sources of electricity.

So if they use so much fuel, why are flights so cheap now? One reason is that not a penny of tax is paid on aircraft fuel.

But fuel use is not the end of the story. Aircraft also emit NOx gases, a product of combustion of atmospheric nitrogen and oxygen in the very hot jet engines. NOx is not in itself a greenhouse gas but it catalyses the production of ozone (O3), which is a powerful greenhouse gas. Nearer the ground, ozone also leads to the formation of photochemical smog which is harmful to human health.

In the stratosphere, on the other hand, ozone is valuable as it blocks harmful ultra-violet radiation. Unfortunately NOx emissions from aircraft which venture into the stratosphere (such as concorde) catalyse the destruction of ozone there. Confused? -Yes, ozone chemistry is complicated, but in a nutshell, NOx emissions are bad news -producing ozone where we don't want it, and destroying it where we do..

To make matters even more complicated, NOx emissions also catalyse the destruction of methane (CH4), another greenhouse gas, although this cooling effect is much smaller than the ozone warming effect (see IPCC graphic below). Aircraft emissions of sulphate aerosols also have a slight cooling effect, but also contribute to acid rain.

It's not easy to quantify the exact greenhouse warming due to water vapour and NOx emissions from aircraft, but a scientific consensus is now emerging, that the total warming effect of all emissions (CO2, H2O and NOx) put together, is in the range 2-5 times greater than that of CO2 alone. This range was confirmed by analysis in the "Special Report on Aviation" published by the "Intergovernmental Panel on Climate Change" (IPCC) in April 1999.

New! You can explore the sensitivity of this ratio all-gases / CO2-alone to various options, uncertainties, and scenarios using the new
( see JCM5 main page for more info)
(Note: JCM5 is based on more recent studies than IPCC-special report but shows that this ratio, the "Radiative Forcing Index", is still within the same range). The image below, taken from the summary of the IPCC special report, shows the relative effect of all the different gases ("fair", "poor", etc. indicates the relative certainty of the estimates).

In the calculations for your proposed journey (box on the right of this web page), the total greenhouse warming from all three gases is calculated by multiplying the CO2 emissions by a factor of 3. This what is meant by "CO2 equivalent warming". Note that this figure is given in units kg of CO2 which is (44/12) times the weight of the carbon alone.

Only the emissions from the aircraft itself are included here. The processes of refining and transporting the fuel also use energy and would add about 8% to the total CO2 emissions (but not NOx or H2O) . Building and maintaining airports and aircraft also uses a substantial amount of energy which is not considered here.

This image (right) shows the CO2 equivalent warming effect for a journey from Frankfurt to Kyoto both by train (left) and by plane (right) -the different colors correspond to effects of different gases. For more details see the "Ecobalance of the Climate Train"

Finally, we should mention the pollution from aircraft that everybody knows about -noise (if you really need to be reminded how noisy a busy airport is, click here). Local residents are also concerned about the effect of particulate and NOx emissions on their own health. All around the world, local residents groups are campaigning against the construction and expansion of airports. Many such groups are linked together by the "Right Price for Air Travel" campaign hosted by Friends of the Earth (Netherlands).

In my own city, Norwich, England, both a group of local residents, and the Norwich Green Party are campaigning against expansion of our airport.

Below are two pictures taken outside the UN Climate Convention COP3 in Kyoto. The placards indicate cities whose residents are campaigning against the expansion of airports. More info is in the "Climate Train" report. 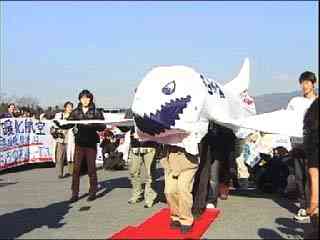 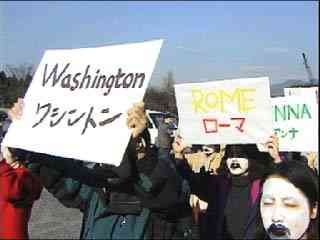